A variety of thread counts appear repeatedly in the drum kingdom, vintage and modern. There are far fewer drums and accessories made today with standard threads, as a lot of US manufacturing moved overseas in the 1980s and switched their tooling to metric. Here we will cover the most ubiquitous thread counts that can be found on drums common to the US. 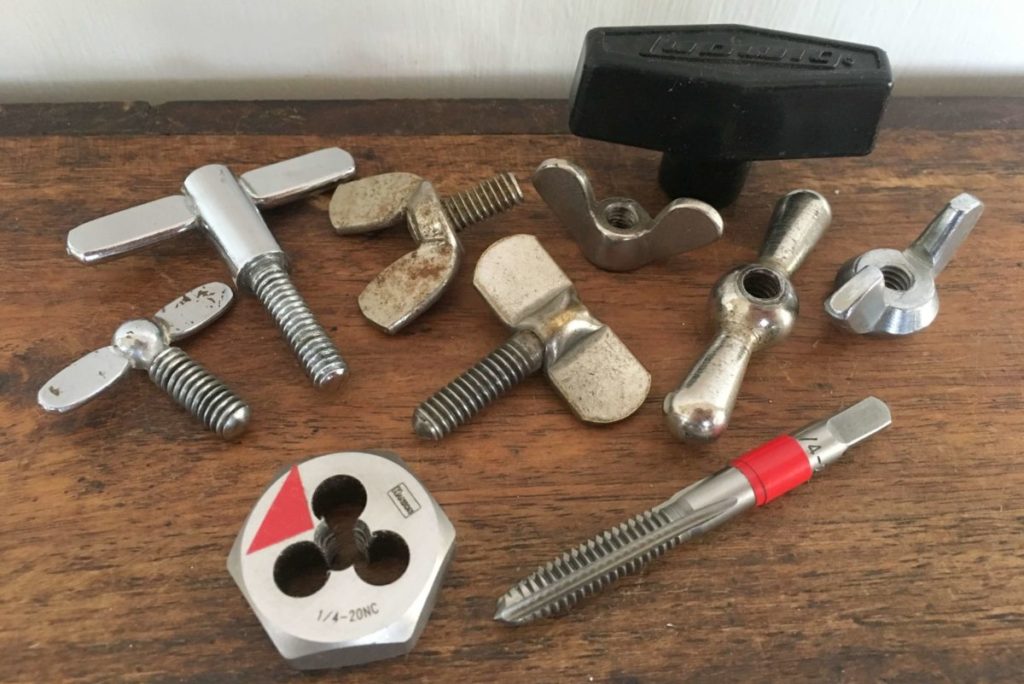 The 1/4-20 thread can be found on all sorts of drum hardware made before about 1980. From stands to clamps to brackets, it is by far the most commonly used thread count from the vintage era. Every brand made a lot of 1/4-20 parts, which makes it fairly easy to mix brands when repairing vintage drum gear. Most cymbal stand posts were 1/4-20, which allowed for the small center holes on old cymbals.

These days it’s pretty rare to see new drum equipment produced with this thread. It is however still a standard for plenty of things, for instance photography gear. 1/4-20 parts are commonly found in US hardware stores.

This thread holds up rather well and plenty of vintage examples exist. It’s a good idea to keep a stockpile of them for restoration. 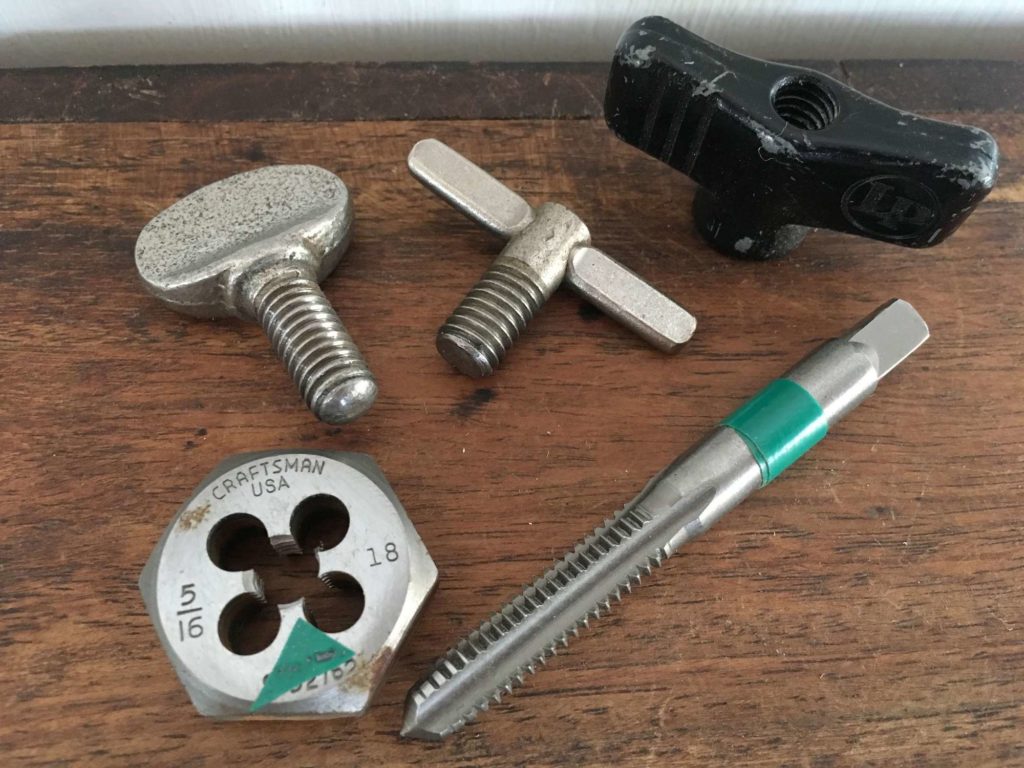 The 5/16-18 thread is a common standard of modern hardware stores. It looks deceptively like 8mm (see below), which can lead to damage by trying to thread a more common part into a 5/16-18 receptacle or vice versa.

Besides appearing on a fair number of traps accessories, this thread was used on a lot of vintage bass pedal hoop clamps, notably Camco and Gretsch’s “Floating Action” pedals. Drum Workshop continued using it decades later when they made the DW5000 based off the same design, and have continued even as they designed their own branded wing bolts.

Ludwig has commonly used this thread on their 1216 and 1610 brackets and eye bolts. Their Consolette rail mounts (as well as other rail mounts) utilized 5/16-18 thread on the hex nuts and carriage bolts.

Surprisingly, many Japanese drum makers in the 60s and 70s used this thread on shell-mounted hardware such as leg brackets and tom post holders. Often these bolts had square drum key heads.

Latin Percussion continues to use this thread on a lot of their clamps and small utility hardware.

5/16-24: The Stripped Bolt On Your Gretsch Leg Bracket 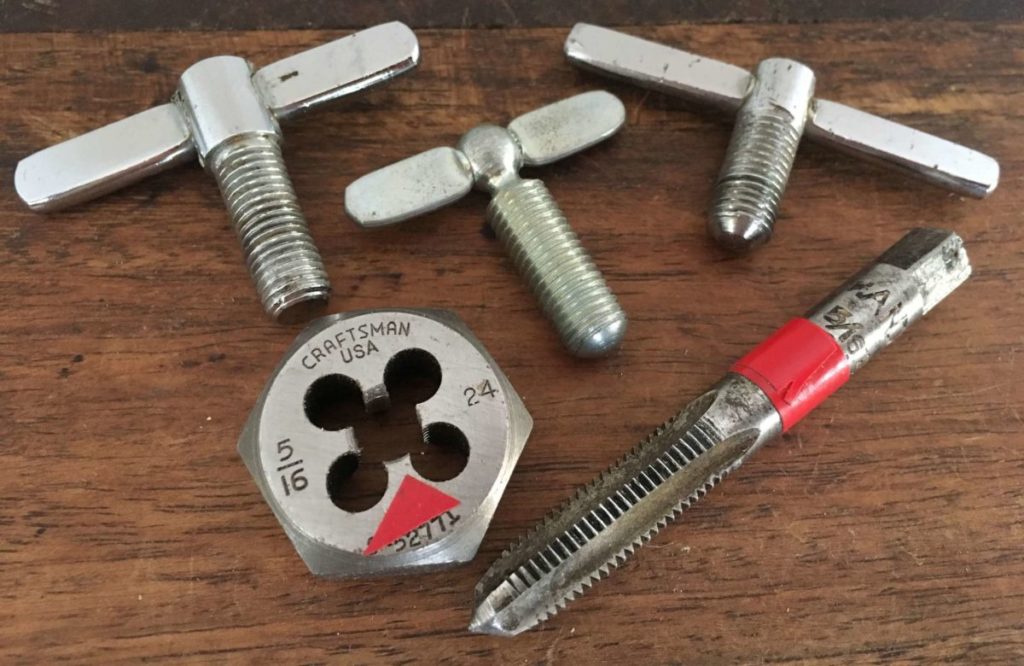 The 5/16-24 thread is less common but was used for many years by Gretsch, Rogers and Slingerland. The picture above shows a Slingerland floor tom bracket bolt, a Ludwig Speed King bolt, and a Gretsch diamond bracket bolt.

The tight thread count and the high torque applied to leg brackets has led to a ton of stripped parts over the years. Original bolts in good condition are at a premium now.

Gretsch used this thread from the Broadkaster era up until the Techware era, most noticeably on their diamond-shaped floor tom and cymbal arm brackets.

Slingerland used this on their floor tom brackets when they replaced the push-button style with the wing bolt style in the early 1960s. Their cymbal stands in the 70s also had these on their lower tripod sections.

The wing bolts on Rogers Swivomatic “swan leg” stands are usually this thread. 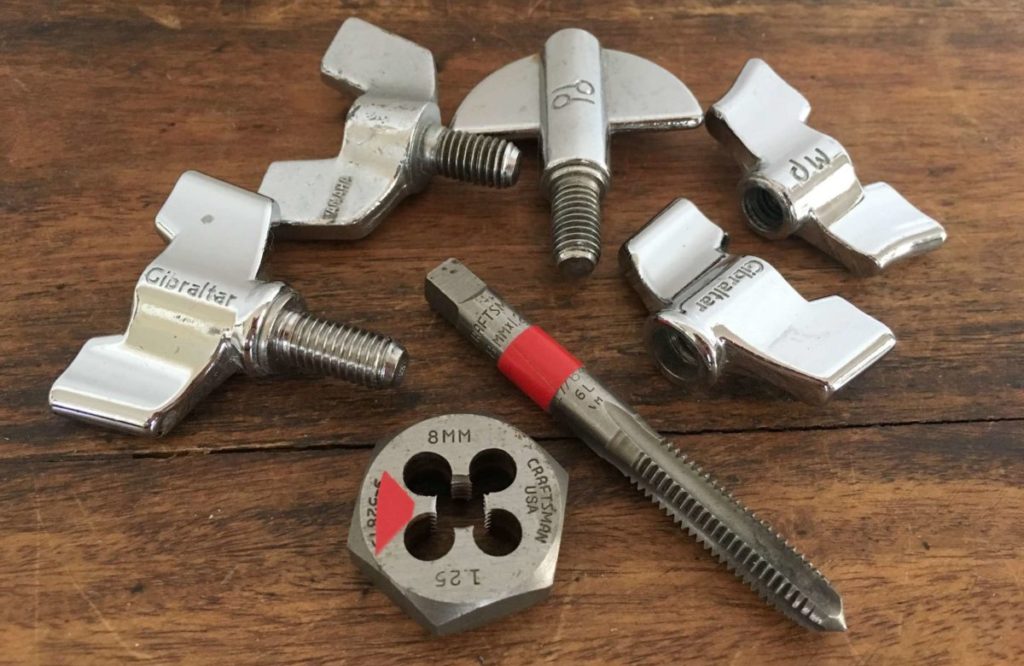 The 8mm-1.25 thread has been the standard for modern drum hardware since around 1980 or so, when drum manufacturing largely moved out of the US. It’s a full-sized thread that holds up well and it’s on pretty much everything, from shell hardware to stands to clamps.

Almost every pro brand uses this thread as a standard. LP is an exception, and DW still uses the more coarse 5/16-18 thread on some hardware as noted above.

The tops of most modern cymbal stands use this thread which means that many vintage cymbals, which were designed for use with 1/4-20 tilters, will not fit. 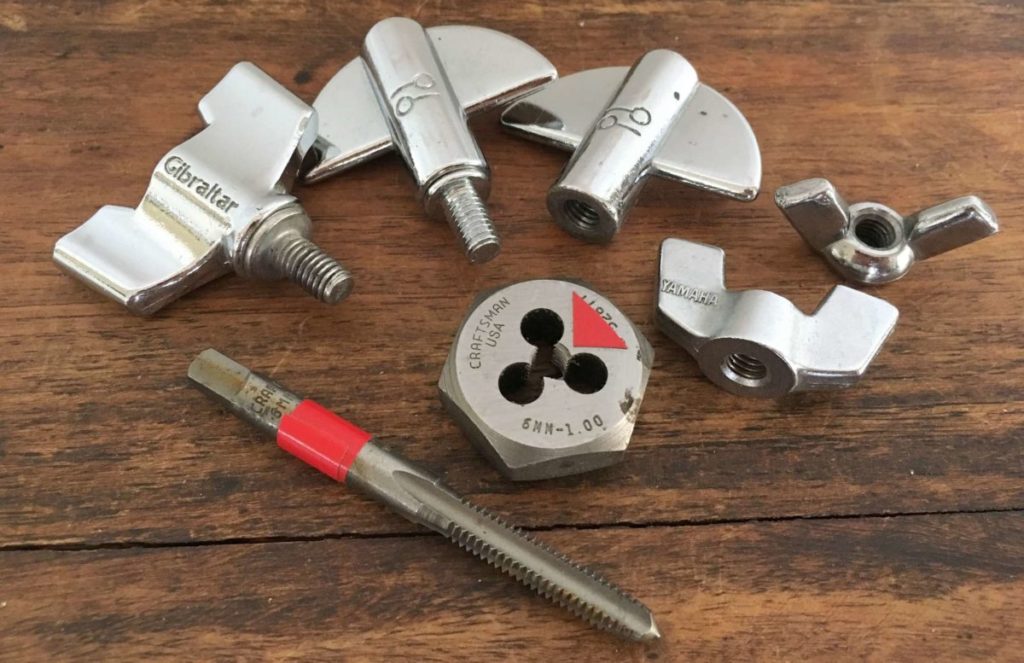 As the thread count is tighter than the common 8mm thread, these parts are more prone to stripping and/or cross-threading. Fortunately it’s easy to find generic wing nuts (such as the one on the right in the above photo) at most any hardware store. Wing bolts are more of a specialty item.

1/4-24 is a little-used thread that Slingerland employed on some hoop clamps and later bracket mount parts from the 1940s thru 60s.

1/4-24 wing nuts are unheard of in the drum world. The wing bolts and housings are easily mistaken for 6mm-1.00. 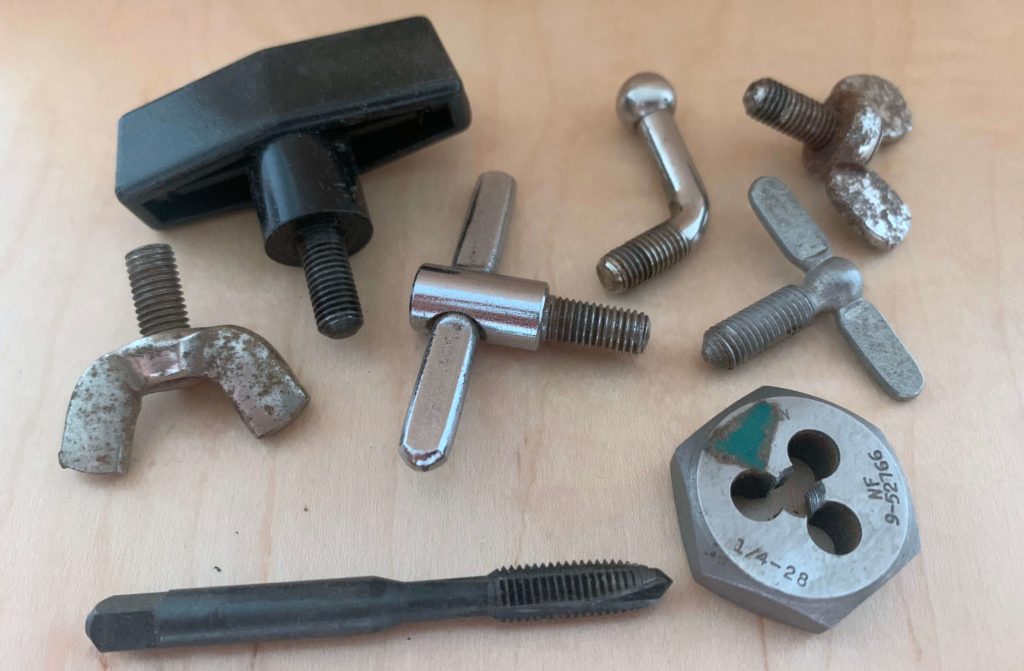 1/4-28 is another uncommon thread that basically only WFL and Ludwig utilized.

Fine enough to be unreliable and strip or cross-thread easily. Nevertheless, Ludwig used this thread into the 1970s, as shown on the black plastic wing bolt in the photo. 1/4-28 wing bolts usually appeared on stands that also had 1/4-20 wing bolts elsewhere.

Like 1/4-24, this thread is never found on wing nuts in the drum world. 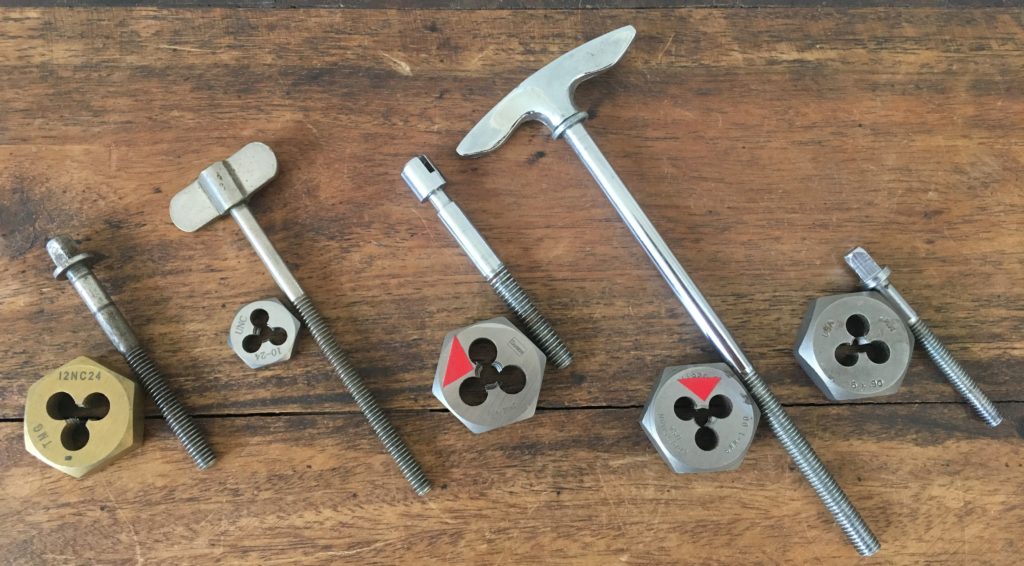 Drum tension rod threads did not experience the same switch to the metric system in the 1980s that wing bolts and nuts did, even as they began to largely be made in Asia. In fact the tension rod thread has moved over the decades toward standardization across nearly all brands. 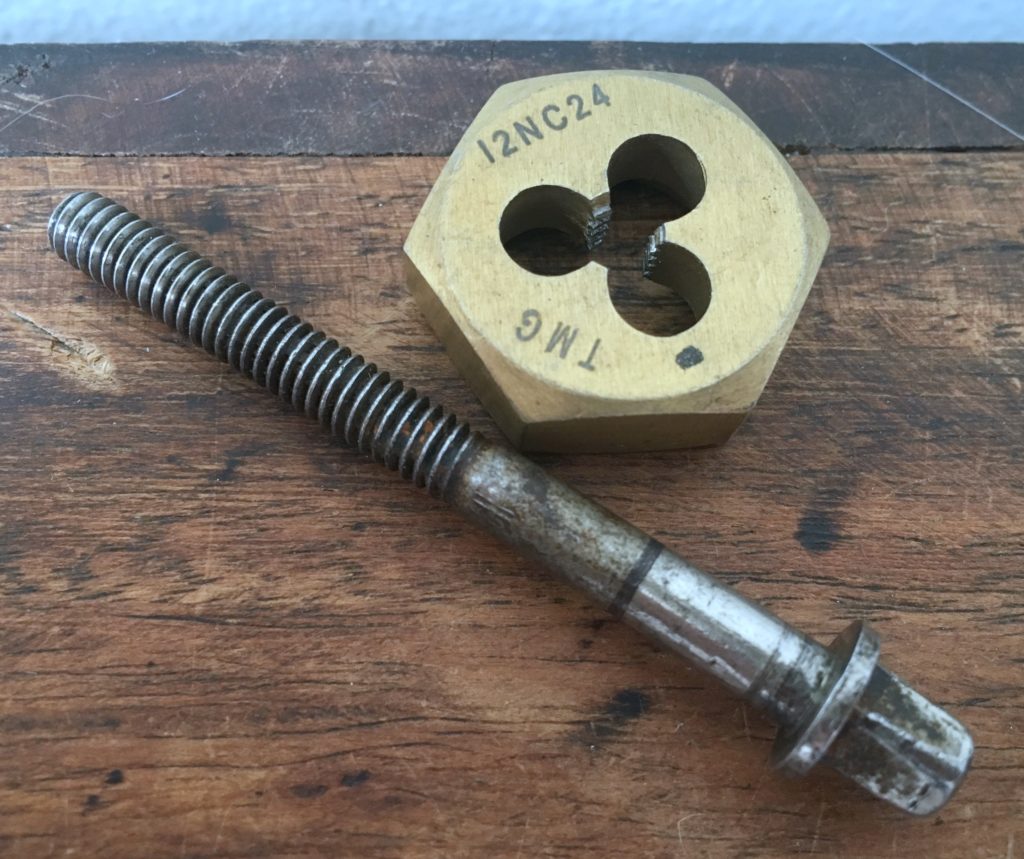 The 12-24 thread has long been the common standard among US makers, used at least as far back as the early 1900s. It was eventually adopted by nearly every drum manufacturer and is now the global standard.

This thread is the reason you can mix different brands of tension rods on almost any drum set.

Interestingly, drum manufacturing is one of the only places where this thread is still used. It is considered an obscure and deprecated thread count in most arenas. 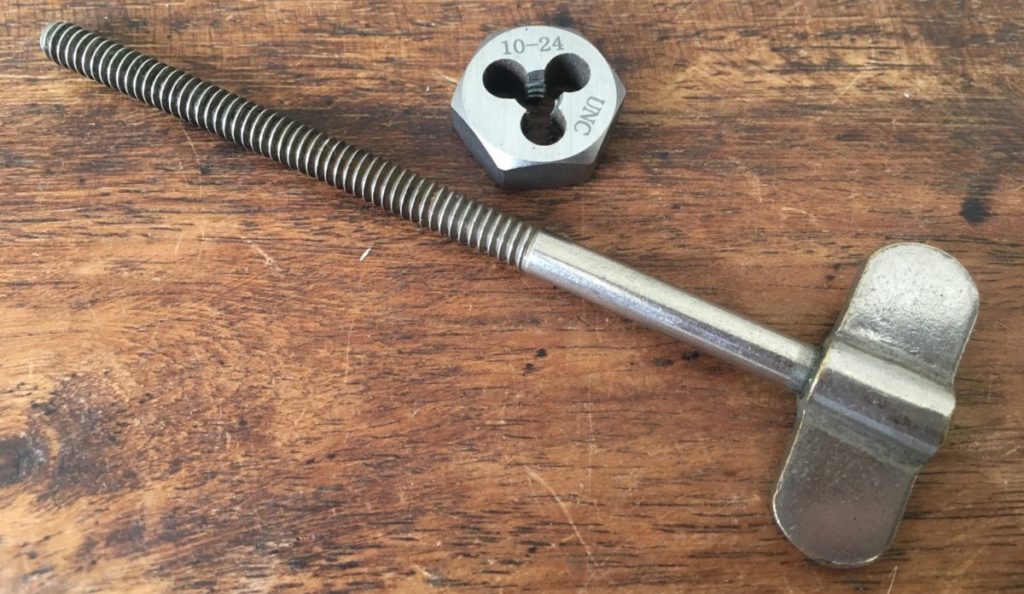 The thinner 10-24 standard is now long lost to history but was once the primary thread used by Leedy. It was found on a ton of small and large drum brands between about 1900 and 1935.

This thread started to fade away after 1930. Leedy’s dominance in US drum engineering waned after their sale to Conn, and Slingerland and Ludwig had opted to use 12-24 rods from their inception.

Because of the era they were used in , chrome examples of 10-24 tension rods are rare. 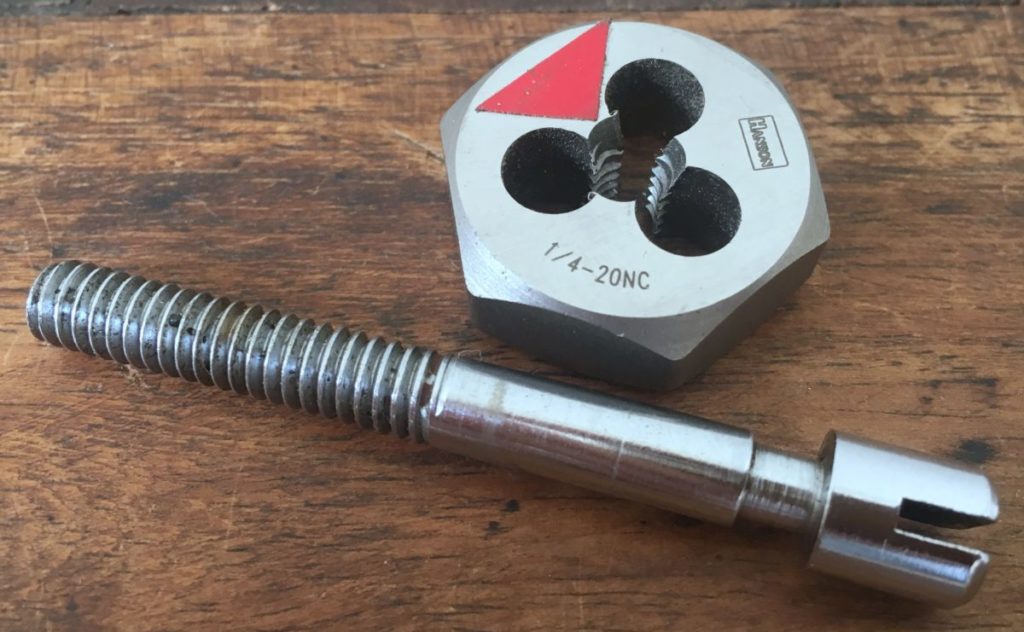 The 1/4-20 thread that appeared on the majority of vintage wing nuts and bolts was also used by some Japanese drum makers for bass drum tension rods.

Sonor has long used 1/4-20 tension rods for some of their lines made in Germany, and continues to currently. 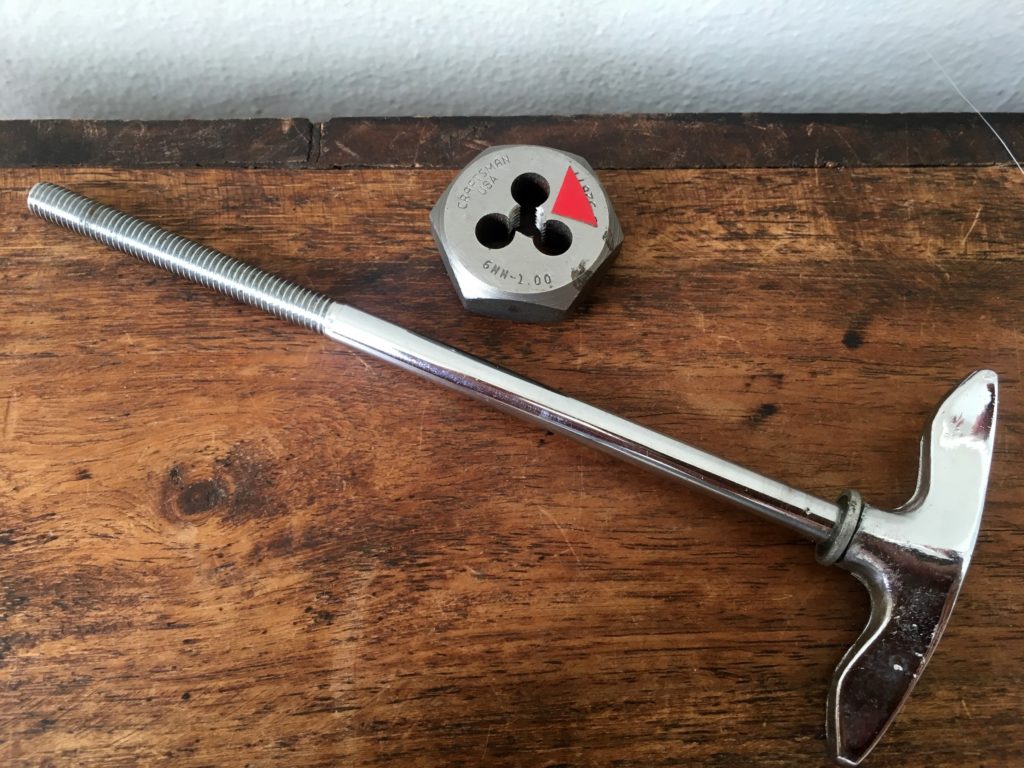 It lives on today as a common standard for wing nuts and bolts on drum hardware, and is occasionally seen on tension rods for entry-level drum sets.

A 12-24 tension rod will fit into a 6mm lug insert, and may appear to catch correctly until under tension. 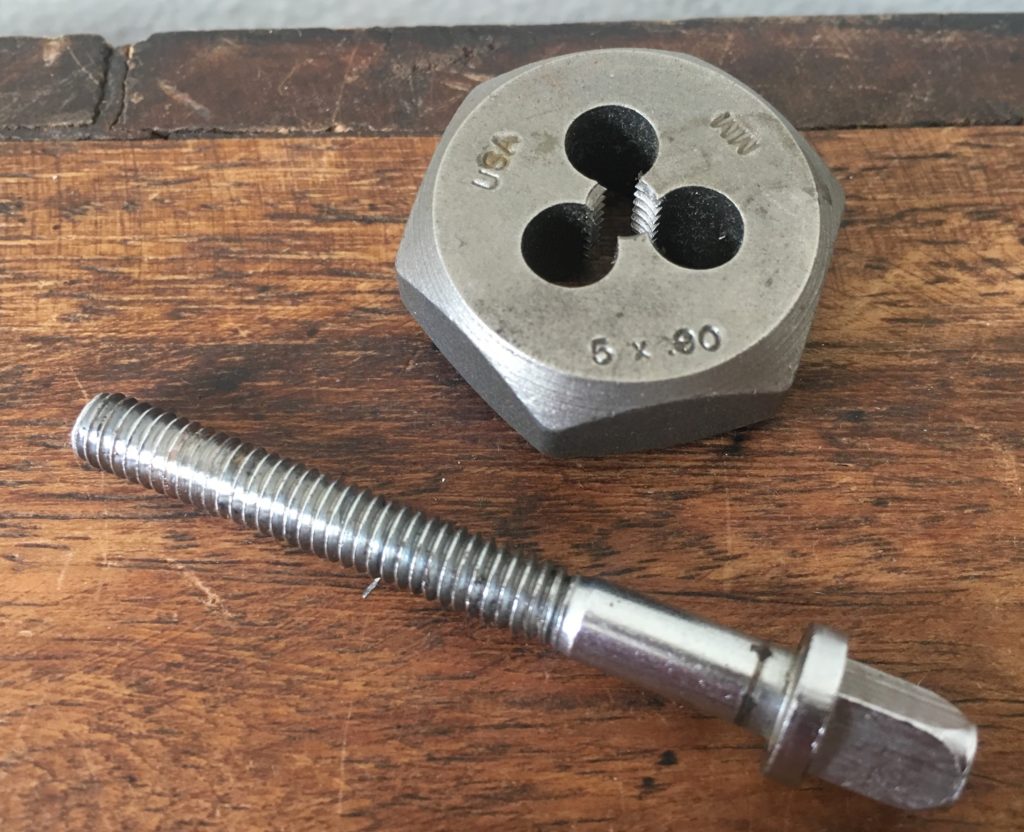 10-24 was a common lug mounting screw standard from the 1930s through 60s. Shown above are Leedy, Rogers, Gretsch Broadkaster and Kent lug screws, and a Ludwig 1216 mounting screw and washer set. 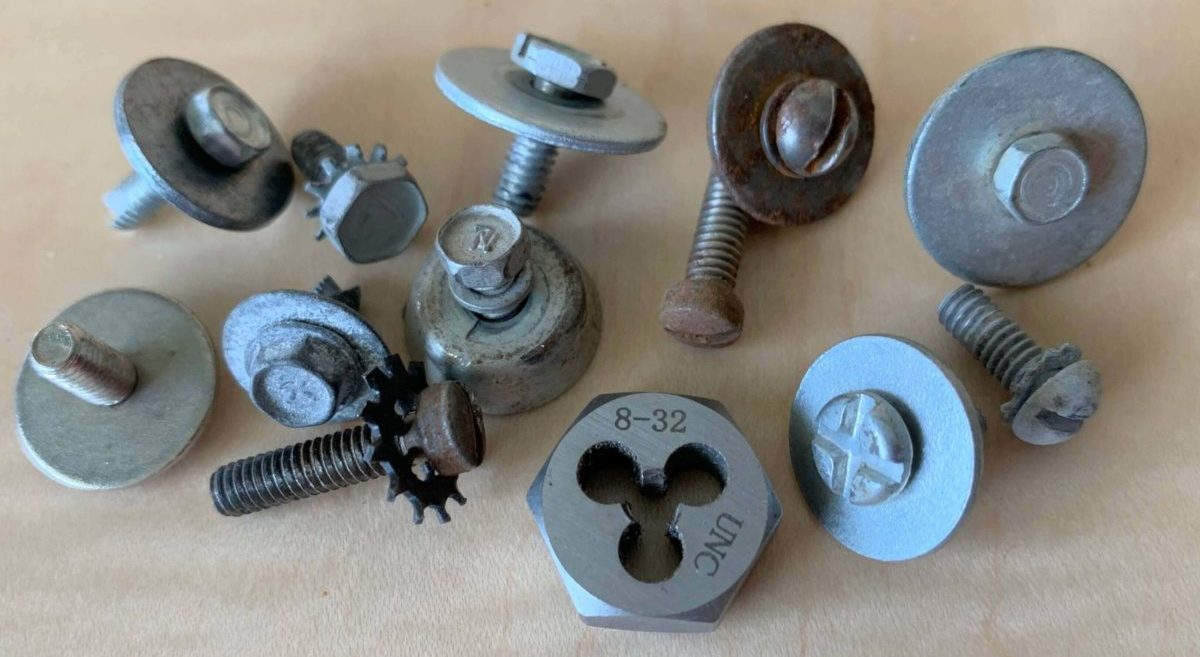 8-32 was the smaller of the two standards for lugs and some other shell hardware from the 1900s through the 80s. Visible in the above photo are mounting screws from Ludwig, Slingerland, Gretsch and Rogers lugs of different eras. 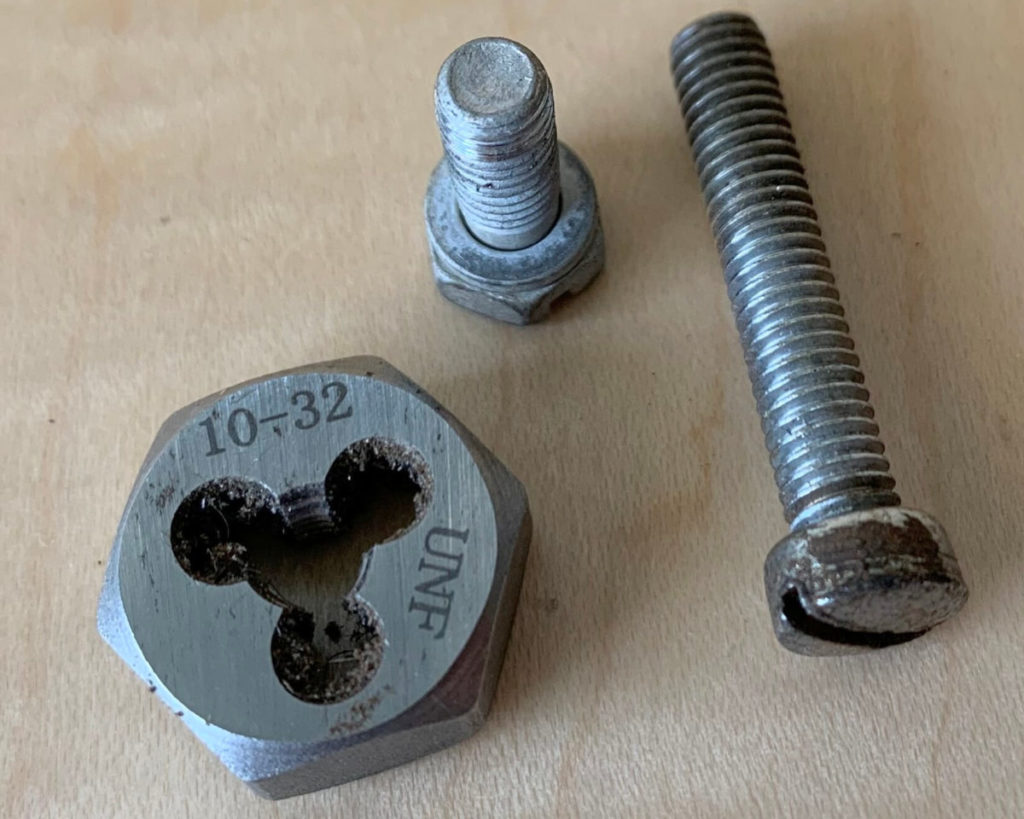 The 10-32 thread was used mainly by Slingerland for shell-mounted brackets. Shown are screws for a Sound King spur bracket and a Radio King floor tom leg bracket.

The 4mm-.7 lug thread is the most common metric thread used for lug mounting screws. It has been used by Asian drum makers since the 1950s, and was adopted by the US brands for their imported lines beginning in the 1980s.

The above photo shows mounting screws from 60s Pearl lugs and brackets.